The Kilty is a real cutie !

A combination of a wallet and a purse, the Kilty has a place for everything and everything in its place.

One of its signature design elements is the kilty on each end of the bag. A kilty is a small kilt and is sometimes seen on shoes or boots.

When it was sold new in the 1980s, the Large Kilty came with a coin purse, a removable checkbook cover, and a sliding shoulder pad. 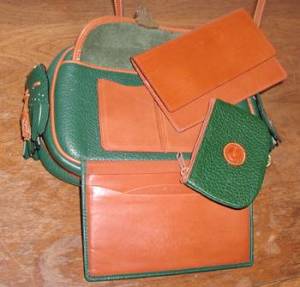 The Large Kilty with all its parts, the coin purse and removable checkbook cover.

Often one or more of these items are missing in a used bag.

The Large Kilty is model number 45 and when the bag has British Tan trim, the designation is R in front of the number.

So this Fir Green and British Tan Large Kilty is a R45.

Want to sell your AWL bags?

Do you have All Weather Leather Dooney & Bourke handbags you want to sell?
If so, click below to read an article that outlines the process.
Do We Buy Dooneys?